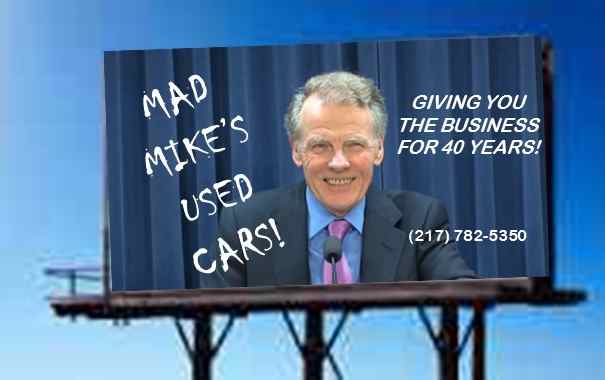 Speaker Mike Madigan held a press conference yesterday and addressed Governor Rauner’s latest ad blitz in support of his “Turnaround Agenda”, the point of which was to label the ads as “extreme”.

Illinois Review has a good summary of the presser:

“Everybody needs to be reasonable, and not operate in the ‘extreme,'” Madigan said. And if the reporters didn’t listen carefully…he used several terms numerous times to emphasize the point…According to our count, during the 20 minute press conference, the Speaker used the term “moderation” 11 times, the term “reasonable” 10 times, “extreme” to describe the governor 16 times, and “non-budget issues” 13 times.

To hear him talk, you’d think that he’s had nothing to do with the condition that Illinois finds itself in, and that his sole reason for living is to serve as the honest broker, bringing everyone together.

When a reporter asked why Rauner’s television ads would be considered extreme while Madigan-funded mailers attacking Republicans in their home districts were not problematic, the Speaker said the mailers the Democrats sent out “were not extreme, they were factual.”

John Kass has summed up the Speaker quite accurately: “Madigan, who plays politics the way Vulcans play three-dimensional chess, does nothing without reason.”

Mike Madigan doesn’t seem to care so much about moderation if the issue is somebody he wants to see in elected positions he considers important to him. Fred Klonsky’s blog points out a 2014 mailer sent out by the Toni Berrios campaign for the 39th District House seat, accusing challenger Will Guzzardi of protecting child molestors.

Klonsky references a post by Mark Anderson of NBC’s “The Ward Room”:

“You know that power structure. It’s the one controlled by Madigan, Joe Berrios and powerful unions that supports incumbent candidates, no matter how ineffectual or criminal or damaging to their constituents they may be.”

There was a great article in the December, 2013 issue of Chicago Magazine, which concludes:

“Most everyone who knows him agrees that Madigan is obsessed with winning. To him, bills are primarily cost-benefit analyses (“Will this help or harm my majority?”). Not only does he crave power; he’s become captive to it. “His job is his life, and his life is his job,” says James McPike, a legislator-turned-lobbyist who served 12 years as Madigan’s majority leader from 1983 to 1995. Adds a current Republican legislator: “This is his oxygen. He can’t give it up.” And that, says (Jim) Sacia, is Madigan’s “Achilles’ heel.”

So when you hear the Speaker talk about moderation, remember who’s doing the talking.