OK, Mr. Speaker, the Ball’s in Your Court.

The Governor has issued an amendatory veto to Senate Bill 1, and the gnashing of teeth and rending of garments has begun. Chicago Mayor Emmanuel, who’s staring into an abyss not completely of his own making but which is now nonetheless his to confront, said the following:

And this in today’s Tribune from my good friend Ralph Martire of the Center for Tax and Budget Accountability:

“CPS would have to tax itself locally and raise this revenue that it currently does not have access to. If CPS actually wants to have adequate resources to educate its kids, the governor’s approach would force it to pass a significant increase to its property tax, well over and above what it currently is.” 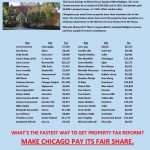 Gee, whiz, Ralph, enough with the hand-wringing already. Making Chicago pay its own way just like the rest of us is something I’ve been screaming about for months. CPS has plenty of access; it just doesn’t have the spine to go after it. How well would CPS be funded if Mike Madigan had to pay property taxes at the same level as they have to do in Harvey? (Click on photo to the left)

As it is, here’s the straight skinny on the major items in SB 1 changed by the governor’s veto:

There were a number of other changes made to SB 1 to return school funding reform to the original spirit of the report issued by the Illinois School Funding Reform Commission and its commitment to promote equity and adequacy statewide. For instance:

All in all, while the bill as amended doesn’t go far enough to provide for substantive property tax relief, it’s a vast improvement over SB 1, and I’m firmly in the camp which will vote to uphold the governor’s veto. Now let’s see if the Senate and the Speaker will let us do that.