Long before I was elected to the House, I’ve been talking about Illinois’ pension crisis (here, here, here and here, to name a few). Since that time, our accumulated pension debt has risen from “just” over $100 billion to somewhere in the neighborhood of $133 billion.

Our annual payments to the 5 State plans is climbing every year as a result of the “Edgar Ramp”, a compromise bit of legislation which provides that payments to the plans will increase each year until they reach $20 billion in 2045, when the plans are supposed to be funded at 90%.

The Center for Tax and Budget Accountability (CTBA) has suggested a proposal to resolve the pension debt crisis by re-amortizing the payment schedule, creating a level-dollar plan that CTBA says will save the state $67 billion and gets the pension systems to 70% funded by 2045. To bridge the higher contributions called for in the first several years of the re-amortization plan, CTBA suggests issuing $11.2 billion in “pension obligation” bonds. The proceeds from these bonds would be used to “front load” the payments due to the pension funds over the next 5 years, and would presumably allow the remaining payments to the fund to become a level to mildly decreasing obligation as opposed to the increasing payments under the ramp. Between 2019 and 2030, the payments to the fund would be greater than would be due under the ramp, but beyond that would stay flat and then decline. The chart below shows CTBA’s estimate of the effect of the front-loading. 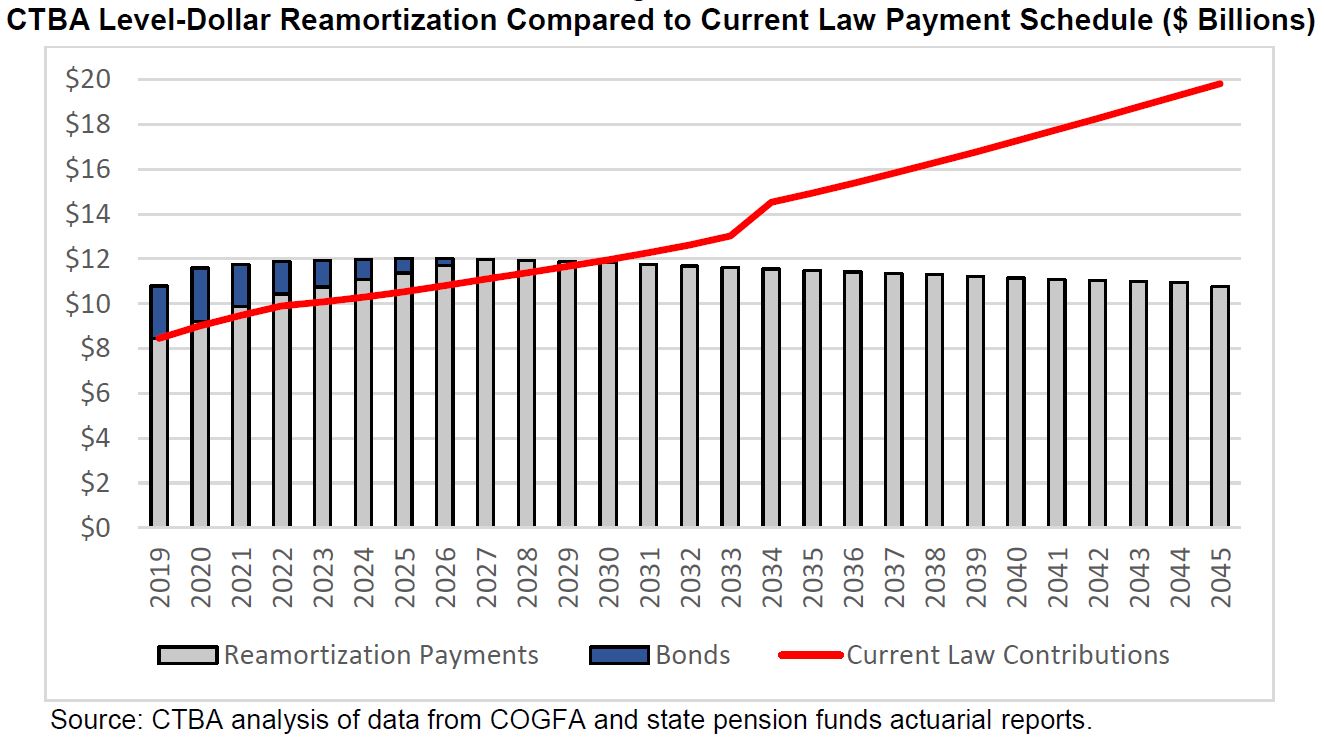 Without going too deeply into the weeds on this, the CTBA proposal differs from the pension bond issuance that happened under Governor Blagojevich, because the proceeds from these bonds are meant to be paid into the plans over and above the normal payment required under current law, while the Blago-bonds substituted for money which was used for other budget items and not paid into the plans (the so-called “Pension Holiday”).

While the idea of moving to a level-payment option has attractions, there are several things which make this particular proposal a risky proposition:

If, between 2019 and 2030, when the level option becomes less than the payment due under current law (see figure above) Illinois can find $4 billion per year in actual budget cuts and cost savings in the operation of State government to fund the increased up-front payment, this plan may work. But given this state’s fragile fiscal situation, piling up debt with the hope that things will all work out over the next 25 years is asking an awful lot.