There Are No Clean Hands in the Pension Debate

In its May 8th decision, the Supreme Court couldn’t have been plainer as to the priority of pension obligations in the state budget, and placed the greatest portion of the blame for the condition of the pension funds squarely where it belongs: on the State Legislature.

To the extent the Legislature failed to pay its required contribution into the funds over the years, it’s clear that the Court is right. However, there are other players in our little drama who’ve not been exactly blameless, among them:

In the 2013-2014 cycle, McHenry County schools paid over $645,000 in penalties to pad the salaries and pensions of 229 district employees. You can find out how much your school district paid in penalties here. If you’re in the Johnsburg or Prairie Grove school districts, you’ll really find this interesting.

Since 2005, school districts throughout the state have paid in excess of $38 million in penalties, which will come nowhere near paying for the increased pension cost: 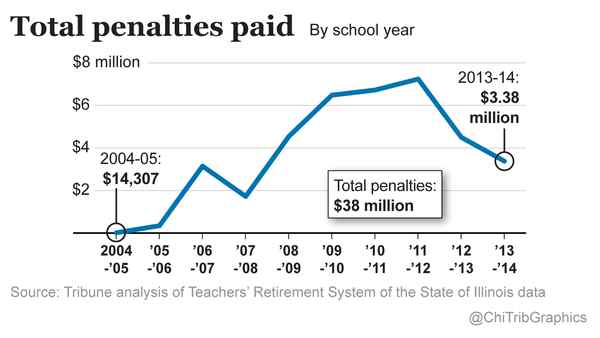 So it’s clear that nobody’s coming to the table with clean hands. It’s usually this type of circumstance that ultimately ends up with a negotiated settlement that all sides can live with because nobody gets everything he wants. It’s time for the parties to stop posturing and pointing fingers and get down to the business of fixing this mess.

I’m on record as supporting the termination of the current plans, calculating and protecting vested benefits and moving everyone to a defined-contribution (401-k style) plan. If there’s a better solution to be had (and Bruce Rauner’s proposal has merit), I’m willing to listen.