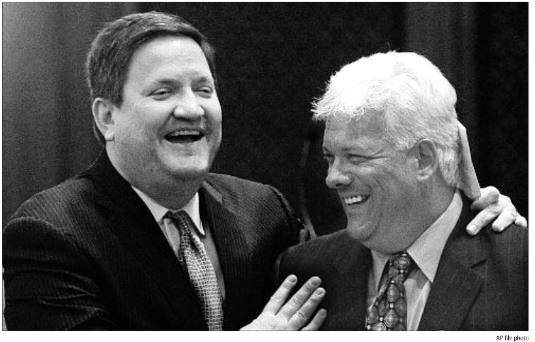 There seems to be some question as to the current status of H.B. 4637, Representative David McSweeney’s bill to eliminate townships in McHenry County that slithered through the House on the last day of veto session.

In a story in the Northwest Herald, the timing of when the bill would be sent to the Governor was discussed:

McSweeney did not give a definitive date of when he plans to send the bill to the governor. Gov. Bruce Rauner’s last day in office is Jan. 14, when he must relinquish his desk to Democrat J.B. Pritzker.  “I’ll send it when I’m ready,” McSweeney said.

He’s able to control the time that the bill will be sent to the Governor by filing a “Motion to Reconsider” the vote pursuant to Rule 65 of the Rules of the Illinois House which states in part:

(d) When a motion to reconsider is made within the time prescribed by these Rules, the Clerk shall not allow the bill or other subject matter of the motion to pass out of the possession of the House until after the motion has been decided or withdrawn.

What this says is that Representative McSweeney is afraid that Governor Rauner would heed the wishes of 21 members of the McHenry County Board and veto the bill if it landed on his desk. He’s going to put a “brick” on the bill until J.B. Pritzker is inaugurated, figuring he’ll sign it.

I’m sure that Representative McSweeney will portray this oleaginous attempt to grease the skids as we move toward the consolidation of power within McHenry County as his first measure of bipartisanship in the new administration. I can’t wait to see the photo of the signing ceremony.

I’ve said all I’m going to say about this bill, it’s now in the political realm. When Algonquin Township votes to eliminate itself, and all those legal fees end up on your property tax bill after they get moved up to the County for payment, just remember who made it happen. Folks, it’s up to you.